Doughnut Economics: A Delicious Future For All

Home  /  Business  /  Doughnut Economics: A Delicious Future For All

Doughnut Economics: A Delicious Future For All 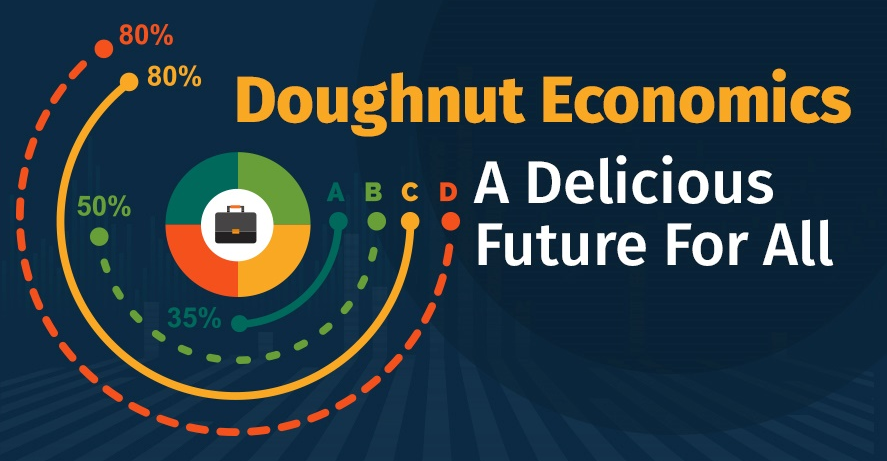 Doughnut Economics is about measuring progress towards an economy with a strong social foundation and an unbroken ecological ceiling. Doughnut Economics, first introduced by Oxford economist Kate Raworth in 2012 and extensively refined in her 2017 book Doughnut Economics: Thinking Like a 21st-Century Economist, has become an increasingly popular framework in academic and policy circles. The Doughnut Economics Action Lab (DEAL) is spearheading practical applications of the paradigm, most notably at the city level.

What Is Doughnut Economics Theory?

The Doughnut consists of two concentric rings: a social foundation, to ensure that no one is left falling short on life’s essentials, and an ecological ceiling, to ensure that humanity does not collectively overshoot the planetary boundaries that protect Earth’s life-supporting systems.

Is Doughnut Economics A Circular Economy?

The Circular Economy and Doughnut Economy are two different models of how economies can be reformed. But because they strongly focus on prosperity that is beneficial for the environment, they complement each other exceptionally well.

Which Cities Use Doughnut Economics?

In their efforts to address the climate crisis and ecological collapse, cities such as Amsterdam, Brussels, Copenhagen, Berlin, and Cambridge are experimenting with Kate Raworth’s Doughnut model—a new framework for regenerative development. Their emphasis on economic reconstruction is igniting new debates over the transition.

Why Do We Need Doughnuts in Economics?

The doughnut economics model can point us in the direction of a more sustainable and equitable economy by highlighting a variety of minimum social standards and maximum ecosystem boundaries. The ‘doughnut’ is the sweet spot in between, a safe zone where people and nature can coexist for generations.

Check out our infographic below which takes a further look into doughnut economics.